Well I'm definitely going. But will I ever be coming home again? - A liquidation story! (Part 1)

I awoke to the sound of my mobile phone alarm, although I'm not sure if I'd even been to sleep at all. 4am! Time to rise from my brief 2 hour sleep in the back seat of my car, parked around the corner from Manchester Airport. 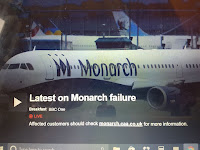 I was about to embark on a trip into the unknown. A four day trip to three European cities I'd never visited before. Brussels, Zagreb and Ljubljana. A trip from which there might be no return. Well I certainly didn't know how I was going to get back home again!

I was flying out to Zagreb via Brussels early Friday morning to catch up with some old friends, to watch the Scotland football team playing in Ljubljana, Slovenia, and to take the opportunity to stand up paddle (SUP) in Zagreb. I was due to fly home on the following Monday evening, flying with Monarch Airlines. But there was a problem. Monarch had gone into liquidation the previous Monday!


At no time did I contemplate cancelling my trip. The Civil Aviation Authority (CAA) had publicly promised to repatriate anyone who was abroad on the day the liquidation was announced. OK, so I wasn't technically abroad on that date, but how would then CAA know that. My plan was to turn up at Zagreb Airport at the appointed time and hope for the best.

Onwards to Brussels. I had a five hour layover at Brussels and the city centre is only 20 minutes from the airport, so I popped into the city for some breakfast before flying onto Zagreb. I found a lovely restaurant on Grand-Place. And I have to say the waffles with fresh strawberries and cream was absolutely exquisite. I'll never feel quite the same about my typical breakfast of plain porridge! Just looking at the photograph now is making my mouth water!

I just had time for a beer or three at the airport before boarding my second flight of the day from Brussels to Zagreb.


I'd never been to Zagreb before but I had some wonderful SUP plans lined up. I had my inflatable
Redpaddle 10'6 SUP with me, carefully packed into its rucksack.

Jarun Lake is on the south west of the city, close to the River Sava. Jarun is well known locally as an area for sports and leisure. Swimming (in the summer months), rowing, sailing etc. And with land based activities around the lake. My internet research suggested it would be an ideal place for stand up paddleboarding, so I made my way over there on the Saturday morning. I understand that it is a very busy area in the summer, with a vibrant nightlife to complement the sporting activities available. This was October, albeit the weather was warm, at least 20C with a strong yellow sun shining in the bright blue sky.

But when I arrived at the lake I could see that some sort of rowing event was taking place on the main part of the lake. It may have been a training event rather than a competition, but there would be no place for a SUP amongst the six busy rowing lanes. I knew there was another lake area behind the rowing lanes. Hopefully I could paddle there but I would have to walk round. There was no way across the rowing lanes. Fortunately my Redpaddle SUP rucksack is on wheels so I could pull it round rather than carry it. 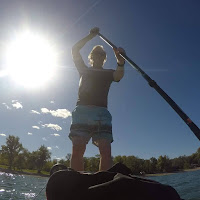 There is an island in the middle of the lake, accessed by a bridge from the west. It was a long walk around and onto the island, but well worth it. I found the ideal launching spot from the south side of the island. I suspect that this would not be a suitable place in the summer as it seemed to be a swimming area. But there was no one around that Saturday morning in October, so it was perfect for me.

What a fabulous paddle it was. The sun, the blue sky and the trees with their orange and yellow autumn leaves were beautifully reflected on the glass-like surface of the lake. A quick lap of the southern area of the lake was followed by a trip down a narrow, tree lined creek which brought me back out onto the main part of the lake. By a wonderful coincidence, the rowing seemed to have finished so, keeping very carefully as close to the bank as I could, I paddled back down next to the rowing lanes, and back round the island to exit the lake at my starting point. I spent just over an hour paddling almost four miles on a peaceful tranquil day. I don't know about you, but that sense of peace and calm is one of the things that attracts me to Stand Up Paddleboarding. When I'm on the water I can leave real life behind and just exist in the moment. Sheer Bliss! 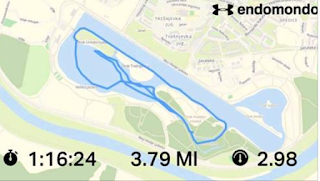 As I headed back to my hotel, I still had no idea how I was getting home but I had lots more fun still ahead of me. Drinks and food with friends. The Scotland game on Sunday. And a really really exciting SUP trip planned for Monday. One I was a little nervous about, to say the least! Read about it, and how I got home, in Part 2 ................
at October 07, 2017