It was a cold Saturday morning in December. So cold, in fact, that the whole of the British Isles was covered in snow. Up to 12 inches. News reports and social media posts were full of reports of people snowed in, roads closed and children building snowmen. Snow everywhere! Everywhere except Southport! Southport Marine Lake, the venue for the annual Santa SUP, organised by my good friends at SUP North, in support of the Santa Sprint taking place along Southport Pier in aid of Queenscourt Hospice.


In the days leading up to the event, every weather forecast was predicting snow overnight on the Saturday night and also on Sunday morning, the day of the Santa SUP. I was really looking forward to a festive snow SUP. But it wasn't to be. I think Southport must have it's own miniature micro-climate. The only good news was that the wind was slightly less than expected. Forecasts had predicted wind speeds in excess of 20 miles per hour but on the day it was probably only about 15mph. The air temperature was only just above freezing. Fortunately I didn't get to find out what the water temperature was!

I had been hoping for snow and no wind. What we got was wind and no snow! At least the wind wasn't quite as bad as it might have been.

Southport Sailing Club very generously made their facilities available for this charity event. The hot coffee was very welcome indeed, not to mention to bacon butties! There were literally dozens of Santas kicking about as well as a few elves and reindeer. Even Joseph and a heavily pregnant Mary put in an appearance (well I guess Mary would be heavily pregnant just a couple of weeks before Christmas!).


In the end there was a very healthy turn out of 49 paddlers in festive fancy dress. I'm sure there would have been a few more but some SUPers were unable to travel to Southport from other parts of the country because ...... Guess What? They were snowed in!

The 49 brave paddlers got on the lake about 10.30 am, ready for the Santa Sprint to begin at 11.00 am, and made their way the short distance down the lake to the spot where Southport's Victorian Pier passes overhead.


The wind was behind us on the way down so it was a quick and easy journey. It wouldn't be quite so straightforward on the way back. The only hazard on the way out was the sheer number of paddlers in such close proximity, many of them being blown into each others paths and some (myself included) being too busy taking photographs and generally not paying attention to where they were going. I didn't spot anyone falling in but I did hear later that someone had taken an early bath. It cant have been much fun at that temperature!


Southport Pier was opened in 1860 and underwent a major refurbishment in the late 20th Century. At 1108 metres it is the second longest pier in the UK and is the setting of the annual Santa Sprint, a fun run along the pier and promenade, to raise funds for Queenscourt Hospice. Every year hundreds of Santas take part and this year they would be running along the pier as another 49 Santas paddled underneath.


It's probably just as well it was only a fun run, and not a competitive race, as many of the runners stopped to look at, wave to, and take photograph of the other Santas on the lake!

SUP North were able to raise the fabulous sum of £386.00 for the Queenscourt Hospice. Thank you and well done to everyone who braved the cold and the wind to take part. It was wonderful to see so many Santa's on the lake.

You can see a couple of SantaSUP videos on my Youtube Channel here.

Can we beat 49 next year? You bet we can! If you're not busy next year, and you're not snowed in, come and join us.

PS A huge thank you to SUP North for organising the Santa SUP, Southport Sailing Club for their generous hospitality, and to Stratus Imagery Ltd for some excellent aerial photographs. 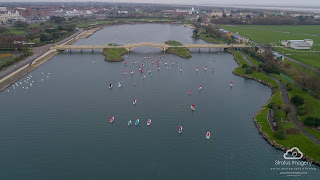 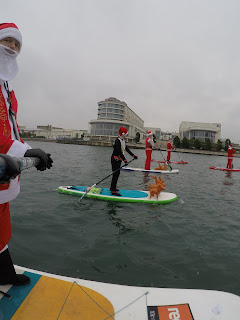