This Is The GlaGla Race. Even The Coffee Is Cold!

'This is the GlaGla Race' said the volunteer at la Savoyarde, with a laugh, 'everything is cold, even the coffee!' as he reconnected the power cable to the coffee urn.


I had arrived early at la Savoyarde, in the tiny village of Talloires, on the shores of Lake Annecy, in preparation for the GlaGla Race 2018. I intended drinking a few warm coffees before the race, in an attempt to warm up my body before the cold to come. Sadly, a loose connection had caused the coffee urn to become unplugged and the coffee was lukewarm at best. Fortunately the coffee didn't take long to heat up, once the problem had been identified and rectified, and I was able warm my insides.

I was at Talloires to take part in the 2018 GlaGla Race. The GlaGla Race in an annual event taking place on Lake Annecy in January, in the middle of the winter. The French expression 'GlaGla' has a similar meaning to the English expression 'Bbbbrrrrrrrrr it's freezing!'. The water temperature at that time of year is around 4 degrees Celcius. In previous years the air temperature on the morning of the race has been as low as minus 10, and on one previous year it has snowed. I had been told that sometimes the wind on the lake can whip up huge waves! All riders were required to have, amongst other items, an emergency survival blanket and emergency energy rations!


I really, really don't like the cold. In fact, for the first three years of my SUP life, I was famous amongst my group of SUP friends for hibernating during the winter months. I would disappear at the end of October and reappear in March or April, like the first blooms of spring. The winter of 2017/2018 was the first year I had paddled through the winter. And I'm not particularly interested in Stand Up Paddleboard (SUP) racing either. In fact I've only ever taken part in two previous SUP races, one 3km and one 4km. So maybe you're wondering why I decided to race 6km in the middle of an Alpine winter? That very question was running through my mind as I was driving from my hotel in Annecy on the morning of the event. I guess I like to do things that are a little bit unusual, a little bit quirky. Things that I've never done before. As I continued my journey towards Talloires I decided I had three objectives for the day: One - to stay alive. Two - to finish the race without falling in. And three - to avoid finishing last.

I had flown into Geneva two days previously with two SUP boards. One was a Redpaddle 11'3 Sport which my friends at SUP North had kindly lent me for the event. I was hoping a Sport style board would help me to a better time than my own board, which is a great all round board but not optimised for speed. The other was a Starboard SUP which I had agreed to bring over on behalf of Starboard for one of their ambassadors, Shilpika Gautam. 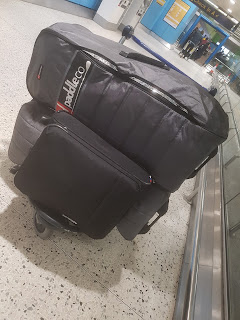 I stayed overnight in Geneva on the Thursday night and had a warm up paddle on Lake Geneva on the Friday morning. The air temperature in Geneva was 7 degrees Celsius and I felt pretty warm in a summer wetsuit with a light jacket and waterproof trousers over, 7mm boots, a waterproof Sealskinz hat and ski gloves. In fact I had taken the gloves off as my hands were too hot! My plan was to wear the same for GlaGla.

Lake Annecy lies in a valley in the shadow of the French Alps, and as I drove into the valley the day before the race, I reflected on the last time I had paddled on Lake Annecy. It had been in the summer of 2016. The temperature was around 30 degrees and the water was lovely and warm. I had always intended to return one day, but I had never anticipated that I would do so in the middle of winter. By coincidence, on that occasion I had paddled the exact same part of the lake where the GlaGla would pass, near the Chateau de Duingt. I was expecting the temperature for the GlaGla to be considerably lower than 30 degrees. Probably around 30 degrees lower!

In fact, on the morning of the race, the temperature at Talloires was around 2 degrees, not much colder than it had been at Geneva, but it felt much much colder. It even looked colder, with the snow covered mountains in the background, still mostly covered in mist, and the crystal clear, blue water. I think the difference was down to humidity, there was so much water in the atmosphere that it felt so much colder. I was pleased I had brought a neoprene vest with me just in case and I decided to wear it under my wetsuit, along with a thermal rash vest. I continued using the waterproof trousers over my wetsuit but I decided to not to bother with the waterproof jacket as I would be wearing a PFD and a bib in any event.

494 brave paddlers lined up for the starting horn at 10.30. I decided to start from near the back and stay out of trouble (consistent with objective number two of my three objectives!). We were paddling into a bit of a headwind, and the water was pretty broken up, a combination of the wind, and the wake from the 400 or so riders in front of me. That apart, the leg to the first buoy was straightforward. I even remembered to smile as a drone flew over my head. I knew the event was being filmed for SUP Racer, and possibly also for French TV. Perhaps I would be one of the TV stars?

The second leg, across the lake to the Chateau at Duingt was straightforward with a light wind behind me. I could see the elite racers a long way ahead of me, but I was content to keep my own pace. In my own mind I wasn't taking part in a race, I was taking part in a 6km paddle in beautiful surroundings. The stretch from Duingt up the western side of the lake provided the best paddling conditions of the day. We were sheltered from the wind here, and cheered on by a few watchers.

But then conditions changed. As I turned at the next buoy, to cross back over the lake, I began to realise the wind speed had increased significantly. There was a strong cross wind and associated waves. I could see paddlers ahead of me, strung out not in a straight line, but in an arc as the wind and waves took them away from their intended track. Immediately in front of me two paddlers fell into the water. In fact one of them fell in twice in quick succession. A number of my fellow racers were on their knees! I decided to take a prudent approach and I spent three quarters of this leg paddling on my knees. Partly as protection from the wind and the waves and partly to avoid a bath in the cold alpine water. Although I really had to dig in to keep moving in the right direction, I took the opportunity to take in my surroundings, the incredible snow capped mountains all around me, the Chateau, and the beautiful lake, dotted with hundreds of stand up paddleboarders.

Once I had traversed the lake for the second time, I was back into sheltered waters, back up onto my feet, and powering home to the finishing line.

After 1 hour, 18 minutes and 56 seconds of hard paddling I crossed the finishing line in one piece. Joy! And I was a long long way from last place. I was alive, mostly dry, and my survival blanket was unused!

At no point did I feel too hot or too cold so I think my dress combination was just about optimal. Had I fallen into the lake I may have reached a different conclusion. But after I had been off the water for 30 minutes or so I began to feel very cold. Within an hour or so the weather conditions had changed for the worse. The wind was stronger, the lake was very choppy and it began to snow. I was glad to have entered neither the technical race nor the dragon race, so I was able to get changed into warmer clothes. I didn't even see the technical race, but I did enjoy watching the dragon race taking place in very difficult conditions. Bravo to those who took part.

After some lunch in the big tent, I realised how tired I was, and also a bit cold. So I decided to head back to my hotel in Annecy rather than stay around for the presentations and party. It was snowing quite heavily by this time.


My weekend away was rounded off in style with a lovely meal in the Captains Pub in Annecy, accompanied by a carafe of local Haute-Savoie white wine, and I returned home the following day. I had enjoyed my few days in Europe but it was time for home. The GlaGla forms part of the Alpine Lakes Tour which involves a number of races, on various Alpine lakes, spread throughout the course of the year. I'd like to do them all some time, but not this year.

GlaGla 2018 was a fabulous experience. The whole event was incredibly well organised, I can't even imagine how much hard work Benoit Mouren and his team put into this, but the huge success of the event is testament to their hard work and dedication.

On a personal level I want to thank my good friends at SUP North, not only for the loan of the 11'3 Sport, but also for all the support they have given me since that very first SUP lesson in June 2014, and for everything they do to promote the sport of Stand Up Paddleboarding. I'm also very grateful to my new friend Gun Dbn for the use of his compressor to inflate my board on the eve of the race and for helping to deliver the Starboard SUP to Shilpika.


But most of all I want to say 'merci beaucoup' to the volunteer at la Savoyard for reconnecting the coffee urn and ensuring my day got off to a great start. The warmth was most welcome, not to mention the caffeine! 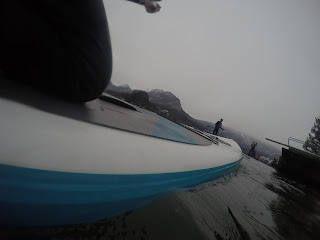 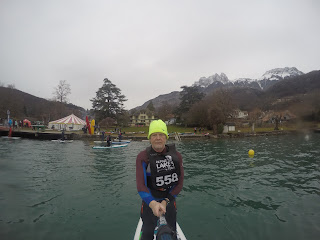 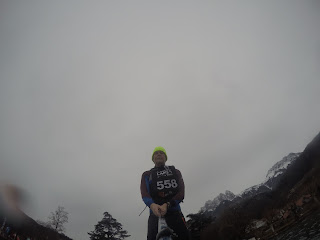 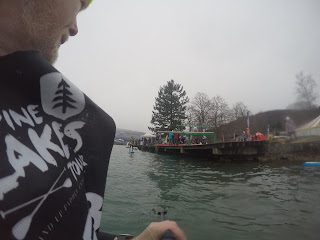