As I was enjoying a glass of wine in the departure lounge at Manchester Airport, before boarding my flight to Budapest, I reflected on my previous two attempts to have a paddle on the River Danube. The Danube passes through 10 European countries, and four capital cities, on its journey from its source in Germany to where it enters the Black Sea in Romania. Two of those capital cities are Vienna and Bratislava, both of which I had the good fortune to visit in 2016.

I had arranged a SUP tour in Vienna, the capital of Austria, which was cancelled very much at the last minute. Plan B was to hire a board and have a paddle on the Alte Donau, the Old Danube. This is a stretch of water which did form part of the Danube in days gone by, but is now completely separated from the river. It is essentially a man made leisure lake. I spent an enjoyable couple of hours paddling on the Alte Donau, with only a couple of brightly coloured sailboats and some ducks for company. But it wasn't really SUP ing the Danube.

The following day found me just downriver in the Slovakian capital city of Bratislava. I had arranged to hire a board from a local watersports shop, a short walk from a small side channel of the Danube. I had definite plans to paddle the side channel, and I hoped to be able to get onto the Danube proper. But when I saw the river I had to think again. It was moving very fast, I had no wetsuit or PFD, and worst of all, when I took the board out of the bag I could see there was no leash! I was incredibly tempted to take a chance, but no leash and no PFD is a bad combination in almost any conditions, never mind a fast moving river. I had a play about on the side channel, but it was barely connected to the main part of the river. and the water was static. I guess it's debatable, but in my opinion, I had still been denied my stand up paddle on the Danube.

When I reflected on this later, I had assumed that there would be a leash in the bag. But I did recall the shopkeeper asking me if I needed anything else. I said 'no'. I guess I had the opportunity to check what items were in the bag, and I'm sure I could have rented a PFD.

Budapest in Hungary is another of the four capital cities. So would Budapest be third time lucky for John?

It's actually illegal to SUP the Danube (or Duna as it is known in Hungary) through the centre of Budapest, except for one day a year when the authorities allow it. Sadly that day in 2018 did not coincide with my visit. Having seen the Danube as it passes through Budapest, I can personally see no reason why it should be against the law to SUP it, but I guess governments and authorities like to ban things! I know there are certainly major restrictions on SUPing the Thames in central London, and the French authorities have recently made it impossible to SUP all the way across the English Channel.


Having previously seen a suggested SUP route on the Redpaddle website (see here) I decided to be slightly more adventurous. My plan was to take the train from Budapest-Nyugati to Nagymaros Visegrad, a 50 minute, 60km journey to the north of the city. I would get onto the river at Nagymaros and paddle across the Danube to the western side, and then pass down the western side of the large island in the middle of the river. David from SUP Budapest had helpfully informed me that it would be possible to get onto the river at Nagymaros and that the eastern side of the island, going past Szentendre, was the more picturesque route. A look at Google Maps had suggested that Nagymaros was a good spot to get on the river, but (as I had learned in Zagreb) first hand knowledge is always more accurate than on online map. I had invited David to join me on my expedition but, as it was out of season, he was ski instructing in France at the time. I am grateful for his advice and I hope to paddle with the team from SUP Budapest one day in the future. Maybe, one year, that might even be the day we are allowed to SUP through central Budapest!


The route past Szentendre was not only picturesque, but also incredibly peaceful and tranquil. I passed three small towns or villages (and one tiny hamlet on a small island), and sometimes I could see cars driving on a road in the distance. That apart, I spend most of the journey completely on my own with no other human beings in sight. There was virtually no river traffic either. I assume it was too early in the year for leisure traffic, and any commercial traffic would have been on the wider, eastern side of the island. If you are looking for calm and relaxing paddle in a beautiful location then you could do much worse than to follow this route. The city of Budapest itself is also spectacular, although I would liked to have had more time to explore the city. Maybe next time!

It was cold, no more than 4 or 5 degrees Celsius, and overcast most of this time. But it was an improvement on the weather in Budapest a few days earlier, when it had been snowing. It was dry, however, and more importantly there was virtually no wind. I was travelling downriver so I had the flow on my side, but, for most of my journey, the water didn't seem to be moving very fast.

I was on the water for 5 hours, with a short refreshment stop on the river bank just opposite Szentendre. I sat on the bank of the river, opposite the village. Next time I do a solo journey like this, I think I will invest in some trolley wheels so that I can easily take my board away from the river and look for a cafe or restaurant to eat in. But for this journey, my refreshments were cereal bars and water!

Shortly before the two branches of the river rejoined, I passed a small island with houses on and no access to the mainland except by boat - or maybe by SUP?


It was only as I approached the end of my journey that I encountered any other leisure users of the river. Just as the two branches of the Danube rejoined, I came across a few canoeists, supported by a couple of motor boats. After so long on my own, it was nice to meet some fellow human beings. I knew I had to get off the river soon, before I crossed the city limits (and into the no-SUP zone). After a short paddle, I came across a pontoon being used by the canoe club. Having asked permission, I used this to exit the river and packed my board and belongings back into their rucksack. The only real negative is that I found myself further away from the nearest metro stop than intended. The wheels on my board bag made the 25 minute walk to Romaifurdo metro station just about bearable, but I was tired and hungry by this time.

A short train journey found me back in the city centre, back at my hotel, and, a quick shower later, I was refuelling next door in the excellent Ket Szerecsen restaurant.


Here is the route I took. At 35 kilometres (22 miles) this was, by far, the longest SUP journey I have ever taken. Although I had the benefit of travelling with the flow, I was very happy indeed to complete this in just under 5 hours. I was also delighted to have finally indulged in some standup paddleboarding on the Danube, and I also felt a massive sense of personal satisfaction at having pushed myself so far beyond my previous comfort zone. I know I'm just an ordinary person. I'm not an athlete, I'm not even particularly fit, but I do love standup paddleboarding. 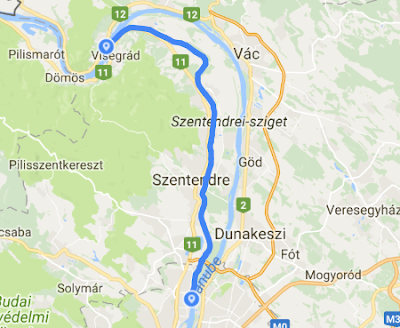 Of course the Danube is 2900km long. My 35km paddle was not much more than 1% of the total. I'm sure I will be exploring this wonderful river further in the future. 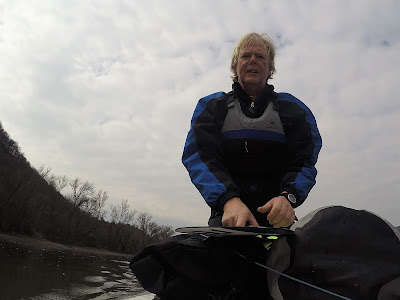 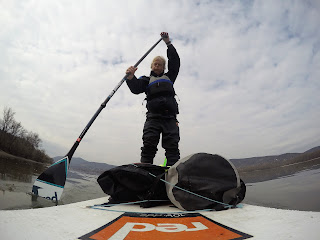